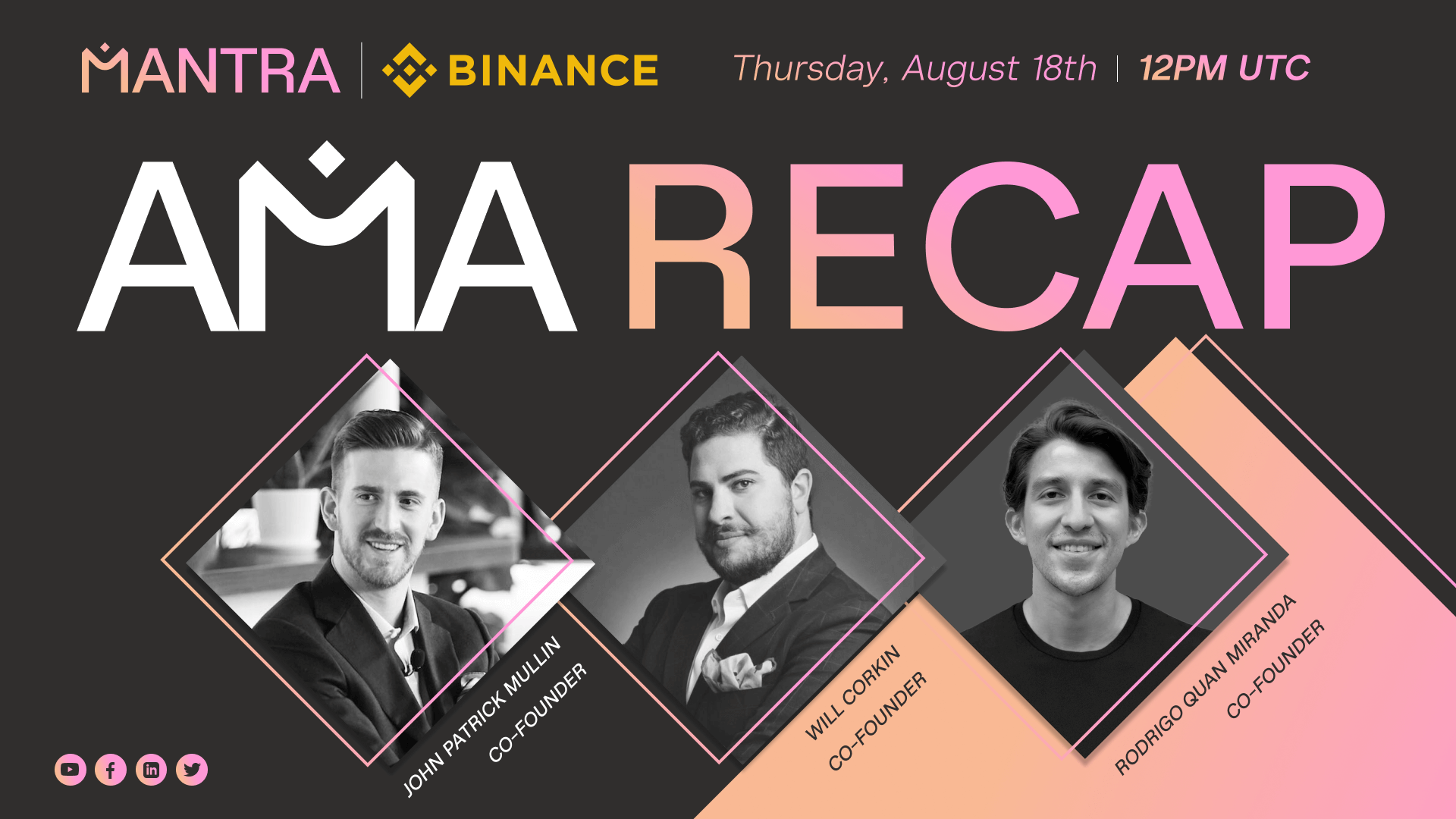 As the global cryptocurrency market expands into different verticals, MANTRA is looking to capture the momentum of these growing areas through its new services like MANTRA Nodes and MANTRA Chain.
Average read time:
5
minute
MANTRA
Key Takeaways

MANTRA DAO was initially focused on becoming DAO in the Polkadot ecosystem, but it has morphed into becoming a multi-chain decentralized finance ecosystem, and that transformation deserved a rebrand to encompass everything that the team has been working on.

As the global cryptocurrency market expands into different verticals, MANTRA is looking to capture the momentum of these growing areas through its new services like MANTRA Nodes and MANTRA Chain.

Tying in all the different aspects of the blockchain industry led to the creation of the “OMniverse,” which is powered by MANTRA’s OM token.

Recently, the team behind MANTRA celebrated its 2nd birthday by sitting down with Binance to do an AMA (Ask Me Anything) and updating the community on the state of the project.

One of the first topics discussed in the AMA was the rebrand from MANTRA DAO to MANTRA which project Co-Founder Will Corkin stressed was about more than just updating the name, logo, colors, and brand.

When it was first launched, MANTRA DAO was focused on becoming a DAO (Decentralized Autonomous Organization) in the Polkadot ecosystem, but it has since morphed into becoming a multi-chain DeFi (Decentralized Finance) ecosystem, and that transformation deserved a rebrand to encompass everything that the team has been working on.

As the global cryptocurrency market expands into different verticals, MANTRA is looking to capture the momentum of these growing areas through its new services like MANTRA Nodes and MANTRA Chain.

Tying in all the different aspects of the blockchain industry led to the creation of the “OMniverse,” which is powered by MANTRA’s $OM token.

MANTRA Nodes also helps the project expand out into the institutional investment ecosystem.

The pillars of the OMniverse can be found on the new MANTRA.finance website. The four pillars are MANTRA Nodes, MANTRA Chain, MANTRA Finance, and the roots are MANTRA DAO.

When asked why the DAO portion was removed from the name and whether or not the DAO portion of the ecosystem was still important, project Co-Founder Rodrigo Quan Miranda emphasized the fact that the DAO is not disappearing and it will remain an important part of everything that MANTRA does.

Rather, the expansion of the DeFi suite of the ecosystem was such that the prior name didn’t quite do justice to what the project developers have built, so the rebrand to MANTRA was the “natural next step to bring the suite of products under the MANTRA umbrella.”

Co-Founder John Patrick Mullin added that as the ecosystem expands into other users that are less familiar with the crypto space, they wanted to avoid any confusion or misunderstandings as to what a DAO is, so the team wanted to pick a name that was more encompassing, which is when they settled on MANTRA.

When it comes to MANTRA Chain, John noted that after adding support for numerous EVM (Ethereum Virtual Machine) chains as well as other networks, they started to realize that there was “limited value creation for MANTRA when they had to give up shared value to other chains and ecosystems,” so they were looking for ways to contain value creation within the OMniverse.

That is when they started to explore building their own chain. After exploring several different chains, the team realized there were several key things:

Because of these factors, MANTRA settled on the Cosmos SDK to build the MANTRA Chain. And to keep with the ethos that led to settling on the original OM name and making its supply 888,888,888 $OM, the team has chosen to name the native token of MANTRA Chain, $AUM.

According to John, the way that MANTRA is being developed means that it will be both a Cosmos IBC (Inter-Blockchain Communication) protocol chain as well as an EVM chain. Its dual chain architecture will connect both the Cosmos and EVM ecosystems.

Plus, with the unique licensing opportunities that MANTRA has due to its connection with SOMA.finance, they will be able to support regulated assets such as tokenized equities, commodities, ETFs, stablecoins, and even fiat currencies into the MANTRA Finance ecosystem.

The public testnet for MANTRA Chain will be launching later this year, with a plan to launch the mainnet next year. $OM holders will be airdropped $AUM tokens over time as the MANTRA Chain rolls out.

On the topic of MANTRA Finance, John said that the idea started by taking the primitives of DeFi, like capital raising or a DEX (Decentralized Exchange), and they retrofitted the compliance piece onto it. First, they had to acquire the proper licenses on the international scene that allows MANTRA to remain KYC (Know Your Customer)/AML (Anti-Money Laundering) complaint.

This allows MANTRA to interact more with the traditional finance world, including real-world assets like equities, and stocks bonds, as well as fiat. Basically, a user would need to verify their identity and tie it to a cryptocurrency wallet, and once approved they will be allowed to interact with the various component of the OMniverse in a decentralized yet compliant way.

MANTRA has developed its own unique platform that could be considered DeCeFi (Decentralized Centralized Finance).

Will Corkin added that the point of adding in KYC and compliance is meant to help further the industry and get it to the next phase of integrating both emerging assets as well as established asset classes.

Rodrigo Quan Miranda added that it is meant to help MANTRA scale to the level of CeFi (Centralized Finance) while keeping the ethos of cryptocurrencies and decentralization.

On the topic of MANTRA Nodes, Rodrigo highlighted that the idea emerged out of MANTRA’s focus on interoperability and establishing validators on all the different chains that were forming the sprawling blockchain ecosystem.

As a way to continue developing in the realm of infrastructure, which is a key component in the continued growth of DeFi, MANTRA developed MANTRA Nodes to be able to service users who want to get involved with that piece of the supporting the blockchain ecosystem.

John added that the way they have designed the nodes business is like a “DeFi mullet.” You will have nodes in the backend providing support across a variety of networks while there will be multiple applications in the frontend that attract users and engagement.

When it comes to partnerships, the biggest partnership highlighted by the MANTRA team was their collaboration with SOMA.finance. Through SOMA.finance, MANTRA has access to various licenses that allow them to deal with tokenized securities in a compliant and regulated manner, helping to bring a new level of legitimacy to DeFi.

SOMA.finance, which will be launching in the next month or so, will be a regulated DEX that will provide access to digital assets, public equities, and securities. Because it’s regulated and KYC’d, users are more protected from bad actors and tainted assets. SOMA.finance will also give users from around the world decentralized access to assets that are typically only available on U.S. markets to U.S. citizens.

John added that being an $OM staker will also give users an opportunity to receive $SOMA rewards, all part of the interconnectedness of the OMniverse.

How can you stake $OM?‍

There are two ways to stake $OM tokens — The MANTRA web app or on the Binance exchange. Opportunities are limited, so $OM holders should act fast.

MANTRA works with Halborn, one of the top audit and security firms, which is always monitoring what MANTRA is doing. They are also working with Runtime Verification to ensure that everything is developed correctly.

What are the job opportunities at MANTRA?‍

Various roles that are open with MANTRA can be found on MANTRA.finance’s Careers page. There are lots of open positions as they look to expand around the globe.

Will $OM be hurt by the release of $AUM?: MANTRA is focused on being a dual-token ecosystem. $AUM will be like the gas token of the ecosystem and help drive its use and growth, while $OM will be the governance token for the ecosystem, which allows people to make proposals and steer the direction of MANTRA.

What are MANTRA’s goals as a validator?‍

MANTRA is looking to become a top-notch validator within the crypto ecosystem. They have already fully built out one data center and are in the process of building a second one, and will also likely expand beyond that to be able to meet all their user’s needs.

An additional incentive for their validator business, this provides additional $OM rewards to users who are participating in the delegation process and also link their EVM-compatible wallets to the MANTRA web app. This is available for several chains, with more to be added in the future.

What is the community input like?‍

MANTRA is community-focused, so taking input from the community is always a focus of MANTRA developers and will remain a cornerstone of development within the MANTRA ecosystem.

Is the UI/UX user-friendly?

‍MANTRA strives to have a very user-inclusive UI/UX and will be pushing an updated platform in the next couple of weeks. Customer service and a response team will also be there to answer questions for the community. MANTRA has 15 different Telegram groups supporting different languages along with a Discord chat and other social media accounts where users can reach out with any questions.

What are the $AUM tokenomics?‍

888,888,888 $AUM at the launch, but that could change over time due to the token being used for gas on the network. There is no set capped supply at this time, but the team will provide an update on the tokenomics in the future.

What happens to the $OM tokens staked on the web app?‍

As for now, they will continue earning rewards as they currently are. $OM stakers will be eligible to receive airdrops of $HELI token from HeliSwap, $SOMA token from SOMA.finance, and $AUM token from MANTRA Chain.

As MANTRA DAO closes in on its second year, we are proud to announce that MANTRA DAO has officially undergone a rebranding to MANTRA.